the dialectic for the study and learning of phenomena

What are logic and debate

The purpose of logic is to understand things that are not directly perceivable though he means of correct reasons. In its very essence, logic is the study of how to formulate a valid reason with a resultant understanding that actually exists in the real world. This can permit a deeper understanding of one’s world of experiences and the interactions between them.

To a large extent all of us draw conclusions that are currently based on assumptions of how we believe things are. Based on the assumptions we take actions, which then result in pleasant or unpleasant, fruitful or fruitless, expected or unexpected outcomes. What logic allows us to do is try and bring our assumptions as close as possible to the reality of a situation so that our corresponding actions will match with the world and the result will therefore not be misleading.

A small example from our lives is when we go to buy fruit; the shopkeeper tries to convince us that all his melons are sweet by making us taste one. Mentally we assume that because the melon we are eating is sweet and it came from this shopkeeper’s batch, his remaining ones are also sweet. This results in us buying more melons. If our assumption is confirmed then we continue to visit his shop until one day we get a tasteless melon. From then on the shopkeeper becomes a liar and we loose faith in him. This could lead to changing to another fruit vendor who will convince us she is better by giving us a sweet orange to eat and we start all over again!

The problem here is not with the shopkeeper or the melons but with our mistaken assumption. Technically speaking the reason we gave ourselves was an incorrect one and therefore expecting a guaranteed outcome based on it was impossible from the start. The study of logic helps in understanding the difference between a correct and incorrect reason. This will lead to more consistency between our assumptions and their results.

In the Buddhist context, the purpose of logic is to remove certain base mistaken assumptions that we all have. These, in turn, are keeping us stuck in a pattern of relying on things that are not necessarily how we think or feel they are. As a result, these assumptions are often lead to our discontent and unease.

The sequence in which one proceeds with the use of logic is first trying to understand what a valid reason is. Once that is clear, then one starts to use such correct reasons to test our underlying assumptions. If we find them to be incorrect, just realizing they are mistaken will gradually reduce their hold on us and we will not continue to circle in such mistaken patters. Staying stuck in such unproductive and harmful habitual cycles is what is known as Samsara. Removing them by shedding light on their mistaken nature and therefore no longer being under their sway is known as Nirvana. Because of the role logic has in removing mistaken assumptions, it is a very central part of the study of Buddhism.

The way such studies are carried out are through the medium of dialectical arguments which we commonly call debate. Because one must have some content to analyze when one first tries to learn debate, here we will be using the Buddhist literature as our content. Once you learn how to debate then the method can be used everywhere.

In the first year we will study a text known as Dudra or Collected topics. It is a collection of important terms and concepts in Buddhist studies. The content is not religious in any way. Rather, it is a classification of our phenomenal world in different ways that is specifically tailored for dialectical arguments. Based on this content, which will serve us at all future stages, one learns how to analyze the concepts by using the dialectical method. This is led in the form of a discussion between either two people or in a group.
Since it is initially difficult to grasp the linguistics of debate one has to spend some time familiarizing with the process. Once we have learned how to debate, it is always used as the primary way of dialogue in studying the text.

After an understanding of the phenomenal world, the nature of the mind that perceives the world is studied and debated upon. Often this is known as Buddhist Psychology. The next subject is the manner in which the mind engages with its objects. Objects that we perceive can be divided into those we can directly perceive and those we can perceive through inference. Here the main emphasis is on how we perceive “hidden” phenomena through inference. Because inference is correct or incorrect based on the reason it uses, what comprises a correct and incorrect reason is taught.

In these three topics we cover phenomena, the mind that perceives phenomena and the way in which perception happens. Together these subjects are what make the introductory matter before one starts their Buddhist studies. Even for someone that isn’t drawn to Buddhist studies, a good understanding of these three topics, with their particular emphasis on logic and debate, provides good tools for the mind to be able to make reliable decisions and is extremely useful in any activity that requires thinking!

We remind you that the session time may vary, except for the start and end time of the first and last day
The program will be offered in Italian and English

Wednesday 5
from 17.00 to 19.00
Presentation of the debate (English required Italian translation)

FROM 18.00 TO 19.30 OPEN CONFERENCE TO ALL: PRESENTATION OF TIBETAN LOGIC-THE DEBATE.

from Monday 10 to Wednesday 12 June

From Thursday 13 to 20.30 to Sunday 16 at 12.30Program integrated with the course The Lam Rim by Fabrizio Pallotti: Atisha and Fabrizio will offer an integrated course between debate and the explanation of the following topics: two truths, four noble truths and the reality of liberation and ‘lighting. 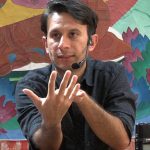 Atisha Mathur grew up in New Delhi where he completed his schooling. After school he did his undergraduate degree in Languages and Literature of South Asia focused on Tibetan studies from the Orientale in Napoli in 2008.

He then studied for two years in the Central University of Tibetan Studies in Sarnath, Varanasi where he was first exposed to the traditional aprroach to Buddhist studies. Thanks to the kindness of his Teachers, a strong wish to pursue traditional studies resulted in moving to the Institute of Buddhist Dialectics in Dharamsala in 2010 where he is currently in the third and final year of Madhyamika after having completed six years of Prajnaparamita along with Pramana