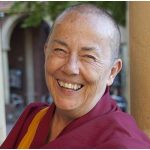 Ven. Robina Courtin, Australian-born Buddhist nun with a powerhouse personality. Her history has been one of extremes – from life as a hippie to self-declared communist to feminist before she was drawn to Buddhism.

Having initially trained as a classical singer she moved to London in 1967, where she lived for four years and became actively involved in the radical left, working mainly with a London-based support group for black and Chicano prisoners. In the early ’70s she became involved in feminist activism and returned to Melbourne in 1972 to work with other radical feminists. In her quest for a spiritual path, Robina also began studying martial arts, first in New York in 1974 and then back in Melbourne in 1976.

Later in 1976 Robina attended a Tibetan Buddhist course in Queensland and in November 1977 she travelled to Kopan Monastery in Kathmandu, Nepal for further studies and became a student of Lama Yeshe. In 1978 she was ordained as a Buddhist nun in Dharamsala, India.

“When I met Buddhism I felt like I had found something I had lost, because, from a karmic point of view, it was something I’d had before, in previous lives. When I heard it again, it was like coming home.”

For the past 38 years Ven. Robina has lived and worked as a Buddhist nun in the Tibetan tradition working for FPMT (Foundation for the Preservation of the Mahayana Tradition). As well as travelling, teaching and bringing the Dharma to people from all backgrounds she has held senior editing positions with Wisdom Publications and Mandala magazine.

In 2000 she founded the Liberation Prison Project to help transform prisoners’ lives so they may cope with incarceration. Ven. Robina regularly visits some of the roughest and bleakest quarters of prisons in Australia and the United States, speaking to groups and meeting prisoners one-on-one. Many of these men are on death row or have life sentences. Most have been in gangs, both on the streets and in prison.

“I have such admiration for people who struggle to deal with the difficulties of life,” she says. Their efforts to understand their own minds and come to terms with life in prison, touches her heart and inspires her own practice and her determination to help others.

Ven. Robina’s no-nonsense,at times confronting, translation of Buddhist psychology that has created a world-wide following as she blasts apart all the usual stereotypes pervading religion and the “spiritual”.

“Being a Buddhist is being your own psychologist, being your own therapist. What that means is really learning to listen to what the hell is going on inside,” Robina says. “The main cause of the misery and the neuroses and the unhappiness in our life is not the outside, but it’s the inside.”
For more information on Ven. Robina visit her website at http://www.robinacourtin.com/biography.php