The blessing of marine wildlife with Lama Zopa Rinpoche

The blessing of marine wildlife with Lama Zopa Rinpoche, Sea Shepherd, Lipu (Italian Society for Bird Protection) and Angelo Vaira, founder of the ThinkDog school, took place on a magnificent sunny day, 8 October 2017, at marina Cala de’ Medici.
Lama Zopa Rinpoche boarded the Sea Shepherd’s Brigitte Bardot trimaran to bless all sea animals with prayers and mantras.
Hundreds of people participated at this interesting event. It was also interesting to see how this extraordinary visit of Rinpoche spontaneously created synergies between different realities engaged daily in the activities to support both animals and environment.
On this occasion, volunteers of the Italian Society for Bird Protection released some seagulls from their rescue centre.
Lama Zopa Rinpoche, famous for his tireless and compassionate work for the benefit of all sentient beings, is the co-founder and spiritual director of the Lama Tzong Khapa Institute in Pomaia, where he is currently guiding a month-long retreat attended by many people from all over the world.
Many visitors used this opportunity to board the Sea Shepherd’s Brigitte Bardot, which set a world record as the fastest motorboat to sail around the world.

Brigitte Bardot, which bears the French diva’s name, helped Sea Shephered’s founder, Capitain Paul Watson (also founder of Greenpeace), fight for his cause in 2010.
This event at marina was organised by the Lama Tzong Khapa Institute and association ‘Sinergy tra terra e mare’ that strives to connect the marina Cala de’Medici with its surrounding territory.
We would like to thank all visitors and participants, Sea Shepherd crew, Lipu volunteers and Angelo Vaira.
We would especially like to thank the association ‘Sinergy tra terra e mare’ and Marina Cala de’Medici for their precious hospitality. 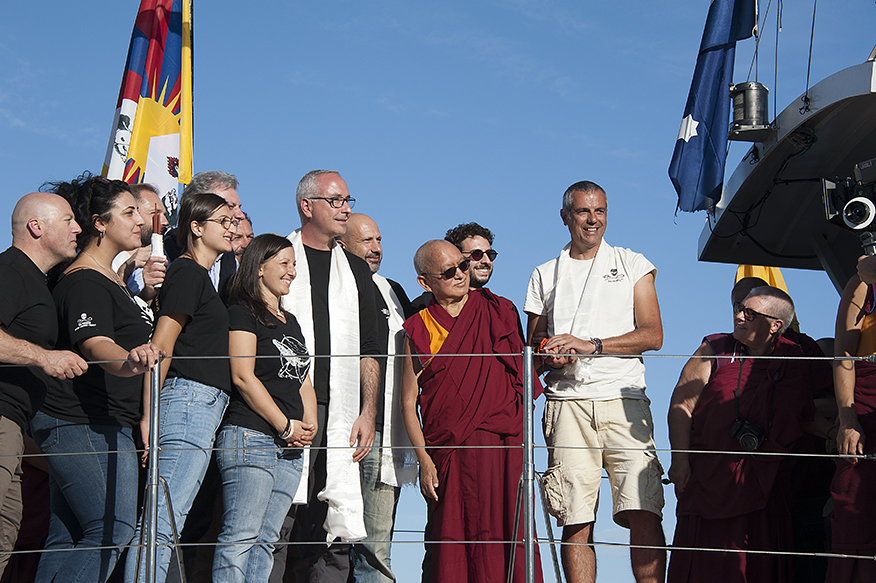