Serkong Rinpoche will give a teaching on the Dependent Arising and Emptiness on the basis of Candrakīrti’s commentary The Clear Words.
This treatise is considered the most important commentary on the Mūlamadhyamakakārikā, the Foundation of Wisdom, rarely explained in the West.

The teachings with Serkong Tsenshab Rinpoche will also take place on Wednesday, 27 May, at the usual time: 12:30 pm-2:30 pm.

The conclusion of the teachings has been moved forward to 28 May in order to not overlap with the teachings of His Holiness the Dalai Lama, that have been announced for 29-30 May: https://www.dalailama.com/live

The Lama Tzong Khapa Institute is happy to confirm the teachings of Serkong Tsenshab Rinpoche from 17 to 28 May 2020.  Due to the current pandemic, Serkong Rinpoche’s teachings will be offered online in Italian and English. You can join this Zoom webinar through our e-learning platform, which enables interactive and dynamic exchange between participants. This webinar is offered free of charge. All donations are welcome. To make a donation, please use one of the methods described below.

As a Tibetan Lama of the new generation, Rinpoche is held in high regard by His Holiness the Dalai Lama and Lama Zopa Rinpoche. Emptiness and dependent arising are distinctive features of the Buddha‘s teachings, and the foundation of all three turnings of the wheel of Dharma. These include both Pali and Sanskrit traditions that developed after Buddha’s parinirvāṇa. By expounding on the nature of phenomena, the two truths – the conventional and the ultimate, the Buddha Bhagwan presented the two most important aspects of the path, method and wisdom. At the culmination of the path, one attains the two exalted bodies, the final awakening characterised by the complete abandonment of the two obscurations and the complete development of all qualities.

Produced in partnership with Wisdom Publication.
These teachings are available to all members of the Wisdom Experience (Free, Plus, and All-Access).

If you cannot join us live, do not worry! The recordings of Serkong Rinpoche’s teachings will be uploaded daily and will remain freely accessible on the e-learning platform for the duration of this course. Recordings will not be available for download. They will be used as the basic study material for the follow-up “Thought Education and Emotional Hygiene” course.

In February, at the request of Serkong Rinpoche, the Lama Tzong Khapa Institute organised and recorded the preliminary video teachings with Fabrizio and Atisha to prepare students for the Rinpoche’s Program in May.

The main aim of these preliminary classes was to introduce and clarify the logical structure of the text and meditations related to it. All audio-visual materials (in English and Italian) can be accessed free of charge on the Institute’s e-learning platform.
The preliminary teachings were based on The Science and Philosophy in the Indian Classics, chapter 2 – Methods of Inquiry: Critical Reflection and Four Reliances, and the first two chapters of the Exposition of Valid Cognition. (Both texts are available in English and Italian).

Master Nāgārjuna is the pioneer of this tradition of transcendental wisdom stemming from the sutras on the perfection of wisdom. Each of his words is an ocean of the vast and the profound meaning that leads to the complete development of human qualities.

In June 2020, we will also launch a follow-up on-line study program called Thought Education and Emotional Hygiene. The aim of this new on-line course, which will be presented during Serkong Rinpoche’s teachings, is to bring the Buddha’s words as interpreted by the great Indian masters of Nālandā, such as Nāgārjuna and Candrakīrti, closer to a wider audience.
The tutors for this new on-line course, Fabrizio Pallotti and Atisha Mathur, will provide philosophical and logical insights (in English and Italian) as a follow-up to Serkong Rinpoche’s May teachings on The Clear Words of Candrakīrti.
Registration opens in June 2020!

This precious opportunity to host Serkong Rinpoche’s visit is a great blessing for the benefit of all. All this is only possible thanks to the one of the fundamental practices of the Mahayana Buddhism, namely the generosity of those who make a free donation.

At the age of two, Tsenshab Serkong Rinpoche II (1984 – present) pointed at the photo of the recently deceased assistant tutor of His Holiness the 14th Dalai Lama and said, “That’s me!” Recognized as the reincarnation of the former Tsenshab Serkong Rinpoche, the young tulku received his initial Buddhist training at Ganden Jangtse Monastery in South India. After deciding to continue his work for the benefit of Dharma as a layman, he completed his education at the Institute of Buddhist Dialectics in Dharamsala. On the advice of His Holiness the Dalai Lama, he completed an intensive two-year English course in Canada, and he continues his higher Buddhist training. 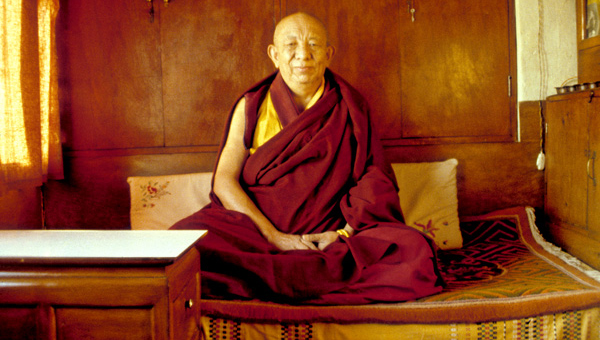 As the master of sutras and all four classes of tantra, Tsenshab Serkong Rinpoche travelled extensively throughout India and Nepal to give teachings and initiations, helping monasteries to re-start their activities in the exile. He made five trips to Spiti, where he followed Atiśa’s example by introducing reforms and revitalizing the monasteries and the Buddhist tradition of that remote mountain region. He also went on two North American and European tours.
Taking on all obstacles for the welfare and the propagation of activities of His Holiness the Dalai Lama, Tsenshab Serkong Rinpoche passed away in full control and in accordance with his intentions, in the manner of the Buddha Shakyamuni, on 20 August 1983 in Kyipar, Spiti, India. His Holiness the Dalai Lama praised his former Master Debate Partner as a real Kadampa Geshe, who always remained humble in the truest sense of the word.