ONLY in italian language 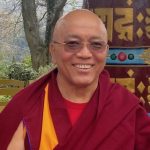 Geshe Tenphel (1965) was born to a nomadic agricultural family in Domo, Tibet, near the province of Sikkim, India. In 1959, with the Chinese invasion of Tibet, Geshe Tenphel’s family fled to Sikkim and later to south India.
Geshe Tenphel became a monk when he was nine years old, but continued studying at the local secular school while memorizing Buddhist scriptures in his holidays. He entered Sera Je monastery at the age of 17, where he completed 21 years of a monastic scholastic education, graduating with honors in 1994, with a Lharam Geshe degree, the highest Tibetan Buddhist doctorate conferred in the Gelug tradition. Geshe Tenphel studied tantra at Gyu To Tantric College for a year before being asked to take part in an international tour of Sera Jey monks. In 1997 he led the group of monks at Sera Je specialized in practices related to Hayagriva.
Since January 1998 he has been resident teacher at Lama Tzong Khapa Institute, where he teaches numerous short courses, as well as the Basic Program and Masters Program.