A rare opportunity to:

In February 2023, Istituto Lama Tzong Khapa will start its fourth FPMT Masters Program in Buddhist Studies of Sutra and Tantra.

The Masters Program is the FPMT’s most advanced education program, inspired by the geshe studies programs in the traditional Gelug monastic universities. Taught by a fully-qualified teacher with the assistance of experienced staff, the program offers in-depth study and extensive retreat experience, providing a thorough grounding in sutra and tantra. It is a uniquely inspiring and fulfilling way for both ordained and lay Buddhists to learn and practice the Dharma.

The program was born out of the exceptional vision of Lama Thubten Yeshe, first realized by Geshe Jampa Gyatso and developed by him into the form of the current curriculum.

The full-time, residential program consists of six years of study and one year of retreat. Quizzes, written exams, review classes, meditations and discussions support the daily teachings. Criteria for certification include academic, meditation, training, behavior, and service components as well as a minimum attendance in the various aspects of the program.

For students who are unable to join the residential program, the Masters Program Online (MPOL) offers the opportunity to complete the study all Masters Program subjects under the guidance of qualified MP tutors.

The Masters Program completion certificate, the highest educational achievement within FPMT, is issued by FPMT Education Services upon completion of all components of the program. Masters Program graduates are eligible to become FPMT registered teachers. Students study six principal subjects, receiving teachings and oral transmissions based  on the main texts and their principal Gelug commentaries, from geshes who are qualified lineage-holders. When time permits, the teacher may supplement the teachings with additional texts and commentaries.

The Masters Program curriculum consists of the following subjects and texts:

Maitreya’s root text presents the stages of clear realization gained on the various spiritual grounds and paths of hearers, solitary realizers, and bodhisattvas that lead to the attainment of omniscience, as well as detailed explanations of fundamental Buddhist topics such as bodhichitta, the Three Jewels, the two truths, the four noble truths, and the four Buddha bodies.

Supplement to the ‘Middle Way’ (Madhyamakavatara)

Chandrakirti’s treatise extensively presents the ten perfections, with specific emphasis on the perfection of wisdom and the many reasonings of the Consequentialist (Prasangika) school for understanding emptiness, as well as other Buddhist and non-Buddhist schools of thought.

Dharmakirti’s Commentary on Valid Cognition is a fundamental treatise on Buddhist logic and epistemology, presenting the reasons that prove the possibility of past and future lives, liberation, buddhahood, and so forth through “valid cognition” (pramana).

The teachings on Valid Cognition will focus on logical inference and the establishment of valid authority, and are presented on the basis of Gyaltsab Je’s Elucidating the Path to Liberation, a detailed explanation of the Pramanavarttika

Vasubandhu’s Treasury of Manifest Knowledge is a vast description of the outer and inner world according to Buddhism—the various types of migrating beings and realms and their causes, actions and afflictions, minds and mental factors, and the spiritual paths and persons who traverse them.

The teachings on the Treasury will focus mainly on the chapter presenting actions (karma) and afflictions and will be based on the First Dalai Lama, Gedun Drub’s Clarifying the Path to Liberation: An Explanation of the ‘Treasury of Manifest Knowledge’.

Grounds and Paths of Secret Mantra

Students will study commentaries including Ngawang Palden’s Illumination of the Texts of Tantra to get an overview of the essential points of the four classes of tantra, with particular emphasis on the spiritual grounds and paths of highest yoga tantra.

PLEASE NOTE THAT ADDITIONAL REQUIREMENTS ARE NECESSARY TO STUDY Grounds and Paths of Secret Mantra. PLEASE CHECK THE REQUIREMENTS SECTION.

The Two Stages of Guhyasamaja Tantra

The class will focus on in-depth analysis of the generation and completion stages of highest yoga tantra, based on the Guhyasamaja Tantra, using commentaries such as Lama Tsongkhapa’s Lamp to Illuminate the Five Stages.

The presentation of the generation stage includes an explanation of the visualization and generation of the mandala and deities and how to carry death, the intermediate state, and rebirth into the path.

PLEASE NOTE THAT ADDITIONAL REQUIREMENTS ARE NECESSARY TO STUDY THE TWO STAGES OF GUHYASAMAJA TANTRA. PLEASE CHECK THE REQUIREMENTS SECTION.

AFTER THE CONCLUSION OF THE STUDIES, THERE WILL BE A THREE-MONTH REVIEW PERIOD AND FINAL EXAM

In each calendar year, Masters Program classes are suspended two months for summer vacation (from the end of June until the beginning of September) and one month at Christmas (from mid-December until mid-January), with a study-break of one week immediately following the Easter weekend. A lam rim retreat will be scheduled each year from mid-January to the beginning of February the first year and mid-February the following years. In addition, classes stop for a few days around the Tibetan new year (Losar), which falls in February or March. Resident students are welcome to remain at the Institute during these breaks, whereas the student housing rates do not apply during the summer months.

Teachings with the principal teacher will be held five days a week, from Monday to Friday. The schedule for review classes, discussion groups, and group meditations will be decided in conjunction with the MP staff. 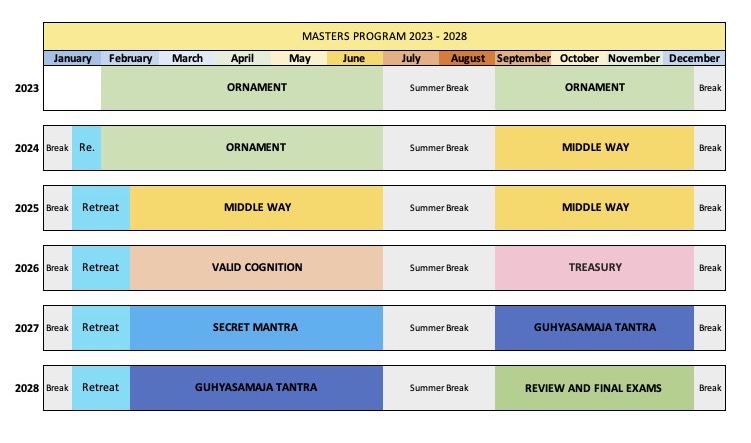 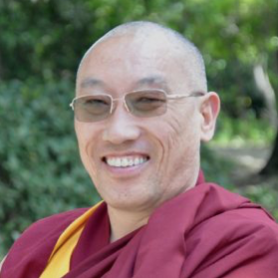 Lharampa Geshe Jampa Gelek, the Institute’s experienced Masters Program teacher, was born in 1966 in the eastern region of Kham, Tibet, and decided very early on to become a monk. At the age of 16 he left Lhasa, following the Chinese invasion (1959), and went to India. He studied at Sera Je Monastic University where he was ordained as a Gelong monk at the young age of 19. His Holiness the Dalai Lama and Choden Rinpoche are his main teachers.

Geshe Jampa Gelek completed his monastic education at Sera-Je monastery in South India in 1999, graduating first of his class. Geshe Jampa Gelek is much appreciated for the great depth and detail of his presentations and his ability to enrich his teachings with an extensive knowledge of multiple commentaries, granting the Masters Program an exceptional level of erudition and knowledge.

Masters Program Admission Criteria
Prospective students should be aware that the MP is an intensive program that is intellectually challenging and highly scholastic, requiring a great deal of application and commitment, especially for those who have not previously studied Tibetan Buddhist philosophical texts. Previous academic or philosophical training is not a strict requirement, but applicants should be willing to put a substantial amount of time into their studies, and to be aware that many things will only become clear over time, with patience, diligent study, and reflection.

Additional Requirements for the Tantra Subjects

The Institute aims at providing opportunities for students to receive these empowerments during the program, before the start of the tantra  subjects.

To be considered for admission to the residential program, applicants must submit their Masters Program application no later than 10 days before the start of the subject they wish to study. See “Residential Program: how to apply” for details.

For the online program, applications will be accepted up to 10 days before the start of the subject. See “Online Program: application” for details.

In addition to offering students a profound deepening of their Dharma understanding and practice, the Masters Program aims at providing the FPMT with highly qualified Western teachers of Buddhist theory and practice. The Masters Program was specifically created and developed in order to fulfill the wish of Lama Yeshe and Lama Zopa Rinpoche to specifically address centers’ need for qualified teachers, qualified both in terms of their academic knowledge and their exemplary conduct.

A Masters Program subject participation card can be issued if the attendance or exam requirements are not met.

A Masters Program completion certificate is issued when a student has successfully completed all six subjects, the three-month review with essay assignments, and one year of lamrim retreat.

A Masters Program homestudy completion certificate is issued when a student has successfully completed all six subjects (according to the MP Online requirements), the three-month review with essay assignments, and one month of lamrim retreat upon completion of the review.

Criteria for subject completion include evaluation of students’ academic performance based on participation in quizzes and exams, appropriate ethical conduct, contemplative practice, and service components, as well as regular attendance in the various aspects of the program.

All Masters Program graduates, both from MP Online and from the residential, full-time MP, are eligible for the FPMT teacher registration process. The former can become Foundational level, the latter either Foundational or In-Depth level FPMT registered teachers, to be invited to teach at those levels in FPMT centers.

While it is possible to join the Masters Program mainly with one’s personal spiritual development in mind, without intending to graduate or become a teacher, residential students are expected to attend classes and retreats and to write all quizzes and exams, as they are intended to stimulate an in-depth review and study of the subject matter, and make the invaluable participation with fellow students possible.

The Masters Program arose from the unique vision of Lama Thubten Yeshe. Lama met Geshe Jampa Gyatso at Sera Monastery in Tibet in 1948, where they became dear friends, studying together for more than twenty years. After asking Geshe Jampa Gyatso to become resident teacher at Istituto Lama Tzong Khapa in 1980, Lama requested him to create a seven-year teacher training program, incorporating the major texts that form the basis of the sutra and tantra studies in Tibetan monasteries and tantric colleges. Geshe Jampa Gyatso agreed and taught three of the seven main subjects and several of the supplementary subjects throughout the years between 1983 and 1997, despite numerous interruptions.

After several years of planning by the FPMT and Geshe Jampa Gyatso, in consultation with Lama Zopa Rinpoche, the inaugural course of the Masters Program commenced in January 1998 with Geshe Jampa Gyatso as the resident teacher. It came to a successful conclusion in December 2004 with twenty-two students completing the entire program and another twenty-nine completing one or more of the five subjects. Among those who completed the entire program, many now work in FPMT centers as teachers, translators, interpreters and center staff, while the staff of ILTK’s bi-lingual residential and online Basic Programs and of the second residential and on-line Masters Programs consisted almost entirely of graduates from the first MP.

For further information on the Masters Program, please contact the Education Office: